This winter I was out for an early morning walk when I noticed this car bonnet with a beautiful pattern on it. As I looked at all the other cars, each had a unique pattern, which if I saw on a fabric instead of a car bonnet I would naturally attribute to an imaginative designer. 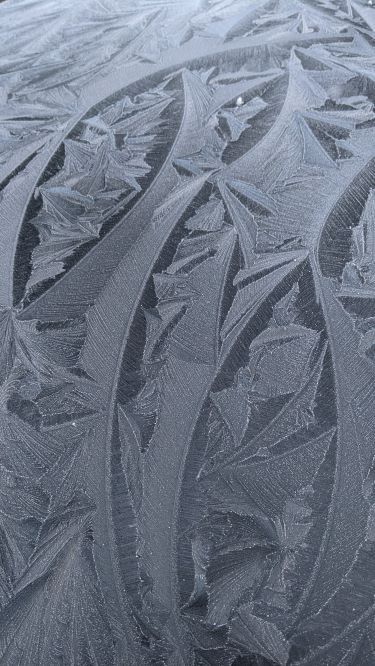 Although we probably don't understand how it happens, we are all happy to accept that "jack frost" (as we used to call it when I was young) is actually the result of natural processes, and something similar can undoubtedly be reproduced with a bit of clever maths.

But when it comes to the evolution of life, there are so many processes interacting in such complex ways over such a long period of time that it becomes very hard to imagine how it could really happen. What is the mathematics behind it, and can we reproduce it ourselves?

This is the remit of the Artificial Life scientific community that I have been part of since 2015. What captivates me about this scientific field is the prospect of understanding life's algorithms in enough detail to be able to use them ourselves, to change the very nature of technology into something more sustainable and less consumptive.

I have a very deep appreciation of the beauty of nature which stems from my days at university. It's not just an appreciation of its incredible beauty but also I feel a deep connection with this ecology of which I am a part. I want to understand nature not merely to classify and describe it, but to understand it as a technologist understands the things they design. You might suppose that because it builds itself this means there's nothing to understand - but the truth is there is so much to understand that it is both mind-blowing and incredibly daunting. The grand challenge of simulating Open-Ended Evolution was described in 2017 as 'The Last Grand Challenge You’ve Never Heard of', and still feels like an impossible dream as of today.

As a good starting place I thought it was worth trying to understand the similarities and differences between technology evolution and biological evolution. Whilst a number of people have attempted to put technical evolution into a biological framework I have taken a different approach and made use of concepts from both to create a unified framework.

I also want to look at the question of how could nature produce such amazing designs when we would normally associate such things with the most inspired of human invention. There are a lot of theories amongst evolutionary biologists on this, some more proven than others. However I am most interested to look at the way humans solve problems and compare this to the way nature solves problems.

I have written up the first stage of the project and will present it at ALife 2022.